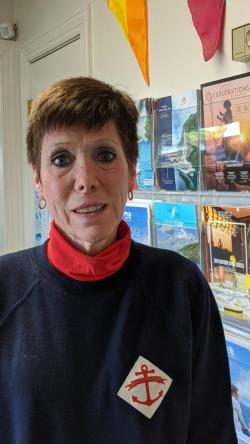 Beatrice (Bea) Mohr was born and raised in Memphis, Tennessee.  She attended the University of Tennessee and graduated with a BA in History.  She has also attended the Hawaii Travel School in Honolulu, Hawaii.

Bea was fortunate to have a family who loves to travel, and she has traveled extensively throughout the US and Canada.  She has been to every state in the union except for Alaska.  (She’s waiting until she turns 70 to take that trip…)

After college, she taught high school for one year, but discovered she didn’t like it, so she packed up and moved to Hawaii. While in Hawaii she met her husband! She lived there for five years. She began working as a travel agent in 1986.  While still in Hawaii, she worked for a travel agency on Pearl Harbor, working with the US Navy and international countries as their ships pulled into the harbor.  While living in Hawaii she traveled to Australia and Japan and Hong Kong. Even took an elephant ride in Thailand.

As a Navy wife, Bea has lived in Monterey, California, Newport, Rhode Island, Charleston, South Carolina and Annapolis, Maryland. Once her husband left the Navy they lived in St. Charles, Missouri before moving to the Lynchburg area. They have lived in this area for 20 years.

Living and working for an agency in Lynchburg has given Bea the opportunity to travel to many cities in Europe and throughout the Caribbean. She and her husband have traveled extensively through Europe.  They have traveled to Iceland, Germany, France, England, Scotland, Ireland, Wales, Austria, Switzerland, Hungary, Czech Republic, Netherlands, Belgium, and Spain.  They have even taken a luxury River Cruise down the Rhine River and were able to visit some of the places that they fell in love with on one of their adventure trips driving down the Rhine.  Seeing cities like Bacharach and Baden Baden is a true German experience.  The Caribbean, with all of it's All-Inclusive resorts has been a great place for her to just relax and enjoy the sunshine.

They always try to find many great adventures and great food and drinks.  They love to find the neighborhoods of locals in large cities such as Paris, London, Munich, Berlin, Dublin, Prague, Budapest, Vienna, Madrid, Barcelona, and Sevilla.  They also love to find quiet country settings and do some outdoor activities like hiking, whale watching, finding Roman and Celtic ruins and of course, castles....so many castles and cathedrals.

Bea has been an agent for 33 years, and has seen many changes to the travel industry. From refundable to non-refundable tickets, to travel agents no longer getting paid by the airlines for their services, to the Internet explosion. But Bea believes the industry will survive because service is key: and in today’s society, service is something you don’t get from the airlines or the Internet.